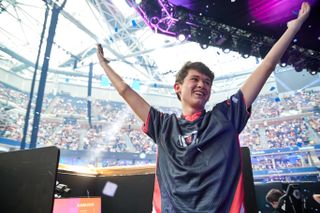 We've come to the end of the first ever Fortnite World Cup and three world champions have earned their spot in the history books, and staggering amounts of money. Bugha was the Fortnite World Cup Solos winner, while Aqua & Nyhrox were the pair crowned the Fortnite World Cup Duos winners, and since they're now three of the best Fortnite players in history, people want to know exactly who they are. Here's complete player profiles for Fortnite Bugha, Aqua, and Nyhrox, including how old they are, their names, where they come from, in-game settings, and more.

Bugha won the Fortnite World Cup Solos Finals after being a relatively unknown player at the start of the tournament, so people are curious about exactly who he is. Here's all the information you need to know about Bugha, although we can't find out exactly how he's got so much raw talent we're afraid.

You can find the rest of Bugha's in-game settings on the Bugha ProSettings page.

Aqua was one of two players to finish first in the Fortnite World Cup Duos finals, alongside his partner Nyhrox. The two saw off notable players including Mongraal, Benjyfishy, Nate Hill, ZexRow, and many more to be crowned the first ever Fortnite world champions, and took home $1.5m each.

You can find the rest of Aqua's in-game settings on the Aqua ProSettings page.

Nyhrox was Aqua's partner in the Fortnite World Cup Duos Finals, and undoubtedly pulled his own weight on their road to the trophy. Here's a complete player bio for Nyhrox.

You can find the rest of Nyhrox's in-game settings on the Nyhrox ProSettings page.

Missed the first day of the World Cup? Check out the Fortnite World Cup Pro-Am and Creative Finals round-up here.