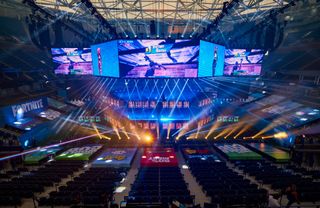 Check out the highlights video below.

The Fortnite World Cup Solos Finals kick off at 1pm ET/6pm BST live on WorldCup.Fortnite.com. There's some huge names taking part in the Solos Finals including Tfue, Benjyfishy, Funk, Domentos, Vivid, Ceice, Bizzle, and so many more. Aqua, one of the two winners from yesterday's Duos Finals, has also qualified for the Solos Finals, so if he could win both events? He'd be undoubtedly the best player in the world.

The first match saw the circle zone in around Loot Lake and Neo Tilted, meaning most players didn't have far to flee from the storm. Numerous players picked up early kills like Vivid, Zayt, MrSavage, and more, as Neo Tilted and the surrounding hills quickly became covered in building materials.

Players started dropping left and right, as King built up a solid seven kills before eventually falling to EpikWhale. Bugha took out Rhux and Pslam consecutively to face off against Kreo in a one vs one, but as Kreo had height advantage, Bugha used a Shockwave Grenade to get above him, then a couple of pinpoint shotgun shells took him out to secure a nine kill victory. That win gives Bugha a nine point lead going into game two.

Into match two and all eyes were on Bugha to see if he could carry on his top form, but he died to Sozmann in the early stages of the game. Attentions switched to King because despite only finishing 21st in the first game, he picked up seven kills, and he managed to perform again with another five kills and 20th place finish. Racking up so many kills with an aggressive playstyle means he's now just one point behind Bugha in first.

The closing stages of the second match saw the circle end amongst the snowy mountains so with multiple players swinging back and forth inside Ballers, it was anyone's game. Commandment, a 14 year old player for TSM, was one of them, and he managed to finish in third place. Skite vs Dubs was the final face off and since Skite managed to maintain the high ground as the safe zone moved, and ascend the cliffside quickly, he left Dubs for dust and won the second match. The win only pushed him up to sixth place however, so he'll need to start picking up a few more kills if he wants to emerge victorious at the end of the day.

Within seconds of the third game starting, King died to Crue, meaning he didn't pick up a single point. Commandment, the young star in third, died early on to UnknownxArmy too, which opened the game up enormously for other players to perform and gain ground on the top spots. Bugha reached the top 10 but with just one kill, he went down to Peterpan, while Skite died to Riversan in the top five. The final battle featured Riversan against Dubs of FaZe Clan, and Dubs managed to take the victory despite Riversan having high ground and an RPG.

Despite only winning the first game, Bugha is holding on to his top spot by the skin of his teeth, as players like Skite, Dubs, Peterpan, and King are all performing consistently well. Early on in the fourth match, Skite eliminated Commandment while Dubs and King both got on the board early too. Tfue managed to pick up his first kill and point in this game, but he eventually fell to Mongraal before he could get another placement point. Mongraal swiftly followed that up with four kills on Benjyfishy, Nayte, Bugha, and Takumuramm, but when faced with a 1v1 against Psalm, he couldn't close it out as Psalm shockwaved into the storm and shotgunned Mongraal in the back.

Bugha has an eight point lead going into the final two games which means he's undoubtedly the favourite; as long as he can pick up a few kills and get some placement points, the $3 million should be is. Early on in the game, Tfue and Dubs died almost simultaneously to Aqua and Stompy respectively. Nayte fell to Clix while Aqua then died to Tchub.

While nobody surged ahead with kills in game five, Bugha made it to the top five which meant that along with his three kills, it gave him another eight points to extend his lead at the top. The final three came down to Pzuhs, Kreo, and Pika, and after Pzuhs took out Pika, Kreo whipped out a common Flintlock and shot Pzuhs right in the chest to knock him out into the storm and win the game.

With a 15 point lead, it's hard to see past Bugha winning it, but if Kreo or Psalm have a huge game and Bugha dies early on, then there's a possibility an upset could take place. Bugha managed to get an early kill on Letshe though to secure another point, while Psalm and Kreo didn't manage to make much happen in the early minutes. Tfue - many people's choice for the top spot - didn't have the best of tournaments overall, but managed to pick up three kills. Too little too late, unfortunately.

Psalm fell to Zayt which meant that if anyone was going to catch Bugha, it was Kreo, but he'd have to have the best game of his life. That wasn't the case however as Kreo died to Tchub, so it's simply a matter of time until Bugha becomes one of the highest earning esports players in history. He played a blinder in the final game, finishing fifth with five kills, which meant he finished on a staggering 59 points - 26 more than Psalm in second with 33.

Head to WorldCup.Fortnite.com to check out the full overall standings, and make sure you check out the latest information on Fortnite Season 10. You can also find the full VOD on the official Fortnite Twitch page.