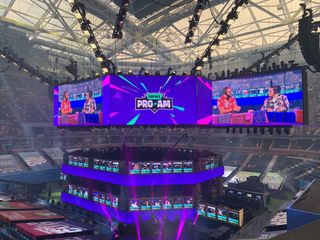 The Fortnite World Cup Pro-Am and Creative Finals kicked off in New York City today, before the real competition starts on Saturday with the Duos Finals. There were some huge names competing in the Fortnite Celebrity Pro-Am this year like Ninja with his DJ buddy Marshmello, Dr. Lupo and EDM artist Sigala, wrestler Xavier Woods, Breaking Bad actor RJ Mitte, and so many more. If you're wondering how to watch the Fortnite World Cup then we've got that covered for the next two days, but when it comes to the Fortnite Pro-Am winners and how the Creative Finals went down, read on.

After a couple of hours delay, the Fortnite Celebrity Pro-Am 2019 tournament got underway. The reigning champions from 2018 - Ninja and Marshmello - were hoping to defend their title but with multiple matches being played this time with a more intricate scoring system, it was truly anyone's for the taking.

In the end, South Korean pro player Sinooh and his partner Oh.king won the first map with a total of 13 kills, granting them 23 points overall. A strong lead over Airwaks and RL Grime in second with 14 points. Notable highlights from the first game included Ninja taking out TimTheTatMan, followed by Marshmello killing Dr Lupo after Ninja had been eliminated.

For the second game, Sinooh didn't manage to perform as strongly, managing just two kills before being eliminated by Jacob. Myth turned up the heat, managing an impressive nine kills, but the final three came down to Tfue, Cloak, and Jacob. Tfue died to the storm, and Jacob managed to get the jump on Cloak, taking home game two. This meant Airwaks & RL Grime shot up into the top spot with 28 points, followed by Sinooh & Oh.king with 26, and Jacob & Clare Grant with 23.

Into the third game and it was all to play for as top players like Ninja, Tfue, and Courage were all sat firmly near the top, while Airwaks & RL Grime had just a two point lead. The final battle boiled down to Cloak, Symfuhny, MrFreshAsian, and Jelty as the zone shrunk till it almost disappeared. Jelty managed to emerge victorious however after blocking Cloak's path back into the safe zone.

Going into the fourth game, the top two spots didn't change, with 42 and 39 points respectively, while third place went to Jelty & Gaborever. Known Fortnite aficionados like Cloak, Jacob, Myth, Tfue, Courage, and Ninja, were all sat in the top 10 though, so it was going down to the wire.

With Airwaks & RL Grime in the lead despite having not placed first in a single match, could they maintain their placement in the final match? As the circle enclosed and the leading pair made their way into the top 10, Airwaks was forced outside of the safe zone and eventually shotgunned by Jacob, but it meant they still secured a decent placement. The final battle came down to both Marksman and JT Brown against arguably the best controller player in the world, Aydan. With the 2v1 advantage, they secured the victory, although it only granted them a sixth place finish overall. Airwaks & RL Grime secured the top spot, with Sinooh & Oh.king in second and Jelty & Gaborever in third. Check out our video on the Pro-Am below, and you can find the full standings here on the official website.

First up in the Fortnite World Cup Creative Finals was Sky Station Showdown, a map which had four control spots granting a varying amount of points, similar to something like Domination in Call of Duty. After a lot of back and forth, Chicken Champions won the set, consisting of RyanFranta, Keroro, Bentzor, and Rubius.

Next up was Junction Juke, a clever map that takes the Prop Hunt mechanic and has four teams trying to sneak their way to the middle of the arena to reach the goal, while the other four teams were trying to shoot and kill them before hand. Chicken Champions proved they weren't a one trick pony because they just about edged it, securing two wins in the Creative Finals.

The final map was World Run, which was a much more traditional creative map which had players racing through difficult trials and tribulations, involving parkour, spike traps, impulse grenade jumps and more. Chicken Champions couldn't quite hold on however, because Sunshine Soldiers ended up victorious: Stuart0000, 4Turtle, Danyan, and Atchiin.

With all three creative maps being complete, the fourth set of the Fortnite World Cup Creative Finals ensued and were called the Golden Games, featuring one match on each map, but with a twist. On Sky Station Showdown, every player could earn points instead of just the selected VIP. Junction Juke limits players to only using large props now, while World Run had permadeath enabled.

Funky Fighters (Draceus, Tomoya, Kouto, Hulzhi) took the win on Sky Station Showdown, followed by a win for Lil Whip Warriors (TalDak723, Taco, Kaz, Ninja) on Junction Juke. Fish Fam (Cizzorz, Tyler, Zand, Suezhoo) secured the win on World Run, with a tense ending from Zand requiring just one more coin to win the map. As a result, Fish Fam walked away with the biggest share of the prize pool, with $1,345,000. Check out the final moments in the clip below.

Heading to the event for the weekend? Check out all of the best Fortnite World Cup Fan Festival activities.