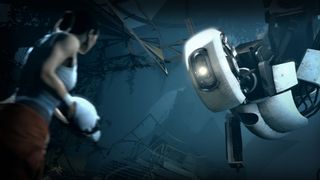 Aperture Camera, the cancelled Portal prequel that was originally in the works at Valve Software during the late 2000s, is finally about to get its time in the spotlight via a new documentary series from developer LunchHouse Software.

As seen in the first of several upcoming gameplay videos below, LunchHouse has obtained the original code to Aperture Camera and, with Valve's permission, will be using it to explore the main mechanics and core ideas of what the game planned to be, before Gabe Newell's prestigious studio shelved it for good.

The first person puzzle game, which appears to take place in Aperture Laboratories (the same setting for both Portal and Portal 2), looks like it would have mainly focused around the use of a camera, which players could deploy to teleport and replicate objects via Valve's signature physics engine.

LunchHouse, which is also making its own game inspired by the Portal series, promises to share more footage of Aperture Camera in the near future, and you can keep tabs on the latest updates via its own website for the project here.

Valve itself, of course, is busy at work on Half-Life: Alyx; the virtual reality based prequel to its famed Half-Life series, set to release on PC for all compatible VR headsets this March. With that in mind, maybe there's still hope for a new Portal game yet.

Check out the biggest new games of 2010 and beyond still on the way, or watch the video below for our latest episode of Dialogue Options.