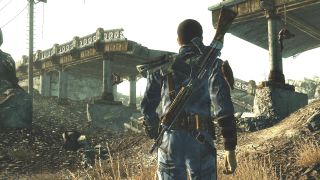 Fallout 76 may have soured the taste buds of most Fallout fans with its imperfect release last year, but Bethesda may have another ace up its sleeve to restore the series back to its former glory, if this new Amazon listing is anything to go by.

Discovered over the weekend, but has since been taken down by the online retailer, the product briefly appeared as an untitled Bethesda product releasing sometime this year for PC, PS4, and Xbox One, with Standard, Deluxe, and Collector's editions all priced at $59.99.

But here's the clincher; the product page also featured a ten second video of the classic Fallout countdown clock, which you can watch for yourself on Twitter here. Notice how, at the "3" mark, a mysterious "L" randomly appears in the bottom left hand corner? It's anyone's guess as to what the "L" stands for, but the fact that it appears on the "3" is being perceived by the internet as confirmation of a Fallout 3 remaster arriving later on in the year.

This doesn't seem implausible, as Bethesda did the same thing with Skyrim: Special Edition in 2016, and the timing of this leak - just a few months before E3 2019 - corroborates with the idea that the publisher is already laying out the cards for all of its major announcements at the show itself.

Some are hoping that Bethesda could even throw a Fallout: New Vegas remaster in with the rumoured package, though all this speculation remains purely hypothetical for now. That said, Rage 2 was similarly leaked via an online store listing around this time last year, and that's already looking like one of the best new games of 2019. Here's hoping the same can be said for whatever this mysterious product turns out to be...

Wonder what all the fuss is about? Fallout 3 is considered to be one of the best RPG games of all time. Read our full list to find out where it landed next to The Witcher 3, Bloodborne, and more.