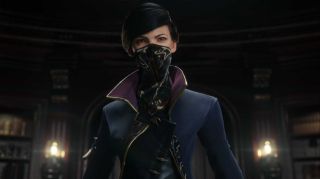 Get your blades sharpened and call up your creepy supernatural benefactors, because Dishonored 2 will launch on November 11.

The sequel to 2012's tale of betrayal and vengeance in a land besieged by mystical plague takes place 15 years after the end of the first game, with empress Emily Kaldwin dethroned by a coup. On the run and trying to uncover who set her up and why, she travels to the never-before-seen city of Karnaca.

The empress isn't the only supernaturally-gifted assassin you'll be taking control of in the game, though. Emily's bodyguard, probable father, and hero from the first Dishonored will also be playable.

Developer Arkane also created new artwork of the game for this month's Game Informer cover, which you can see below.

With E3 2016 right around the corner, expect to learn plenty more in short order.