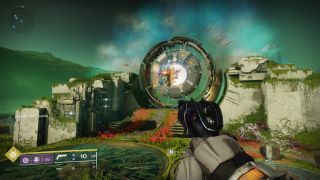 Vex Offensive's Final Assault update, the last item on the initial Destiny 2: Shadowkeep content roadmap, arrived today. Unexpectedly, the update made no major changes to the way Vex Offensive actually plays. Instead, it simply added a new final boss which feels a lot like the old one. However, in-game remarks from Ikora and Ghost, not to mention past comments from Bungie, suggest that Vex Offensive will change yet again in the coming weeks - hopefully in a more meaningful fashion.

To access the lightly updated Vex Offensive, speak to Ikora in the Tower. She'll explain that the portal she's been building has been finished and that this will affect how Vex Offensive plays out.

"The portal is completed," a prompt says. "Now, at last, the final phase of Ikora's plan to eliminate the Undying Mind can be put into practice. She and Zavala have tested the hardware extensively, locating and destroying instantiations of the Undying Mind - but there are hundreds, if not thousands, of copies still lurking in the Garden. This task now falls to you. Enter the Black Garden to locate and defeat the Undying Mind."

From there, it's off to the Vex Offensive playlist to hunt more Vex. The Undying Mind is the new Hydra boss of the activity, but apart from the typical rotating Hydra shield, it uses the exact same mechanics as the old Minotaur boss. Once you kill the Undying Mind, your Ghost will say something along the lines of 'one down, a whole bunch to go' - again referring to the sheer number of Undying Minds left in Vex instances.

As it stands, Final Assault is lackluster and doesn't feel any different from vanilla Vex Offensive. It's possible players will uncover new loot or secrets hidden in the update, but it feels pretty lukewarm. That said, the prospect of killing a whole bunch of Undying Minds to complete Ikora's plan is promising. Bungie's asked Destiny players to hunt down enemies in the past, like with the Dreaming City storyline or the Mars community event, and it's looking more and more like Vex Offensive will tie into - or outright catalyze - the next season of Destiny 2.

Bungie previously explained that future seasons will be connected in clearer, more substantial ways. It also confirmed that seasonal activities like Vex Offensive will disappear at the end of their season. Coupled with Ikora and Ghost's comments on the latest update, this suggests that Vex Offensive's Final Assault and the subsequent Undying Mind hunts will set up the events of the next season. That's just speculation on my part, and I do wish the update was more exciting now, but I have to admit I'm interested to see what happens next.

Black Friday is almost here. Check out our Black Friday game deals round-up for all the buying advice you need.