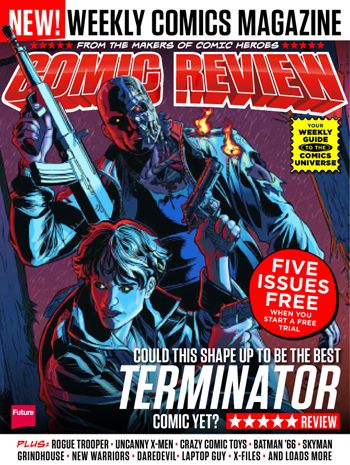 Just 99p or free if you subscribe to Comic Heroes .

Hell, it’s even free-er (is that a word?) if take up our special introductory offer as subtly shown on the cover here. We just thought we’d mention it in case you didn’t notice the huge red blob.

More importantly, in the latest issue you will find:

• 14 reviews of the top comic releases this week including:
Terminator: Enemy Of My Enemy
Daredevil
Unity
New Warriors Uncanny X-Men
Dexter Down Under
Skyman
And loads more

We also have an interview witrh Grindhouse writer Alex De Campi, a preview of a new British “sitcomic” called Laptop Guy , a preview of the US Rogue Trooper and loads of pics of crazy superhero toys from the New York International Toy Fair.

All with pop up galleries throughout!

Comic Review , available for iPad, iPhone and iPod Touch, can be found in the Comic Heroes app now and is FREE every Friday to new and existing Comic Heroes subscribers!