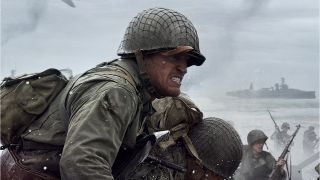 One of the new multiplayer modes for Call Of Duty WW2 is War Mode, which sees a squad of players working together to achieve objectives. In other words rushing in all guns blazing and screaming swears into your mic isn't going to cut it in this mode. When we spoke to Michael Condrey, studio head at Sledgehammer Games, he revealed that War Mode won't just change how you play, it'll change who you play. That's right: someone has to be the Axis, AKA the Nazis.

"One of the War maps is Operation Neptune and that’s D-Day," Condrey says. "You will play D-Day from the Axis perspective; you’ll begin by having to hold the Allies off the beach, and I don’t think anyone’s ever seen that before, let alone played that before."

It definitely sounds interesting, but also like that particular War Mode campaign could attract the worst possible people for all the wrong reasons. Fun twist on the usual historical perspective, or troll's dumpster fire? Only time will tell. It's worth noting that Call Of Duty WW2 doesn't have an Axis single-player campaign, which is probably for the best.

"We love traditional multiplayer, obviously, the fan favorite modes are still super fun," says Condrey of the new mode. "But War does play out in a very different way, and with custom maps and these asymmetrical experiences, we can put you in places that a traditional map just wouldn’t allow. And we can allow you to see the conflicts from both sides, from the Ally and the Axis perspectives."

Call Of Duty WW2 will be released on PlayStation 4, Xbox One, and PC on November 3.