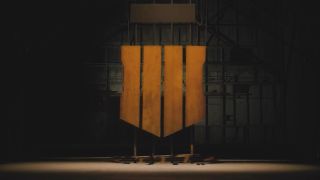 We live in an age of leaks and data-mining that makes true surprises a rarity - but this is just ridiculous. After James Harding's hat all but confirmed the new Call of Duty logo yesterday, Activision has confirmed that Call of Duty: Black Ops 4 is coming this year. And yes, the logo is indeed 'IIII' opting to go the jail cell-wall tally route rather than the Roman numeral 'IV'.

There's barely any info to go on right now: a community reveal event is slated for May 17, while the game itself will debut for PS4, Xbox One, and PC (so no Switch version, then?) on October 12, 2018. The sizzle reel of gameplay is just shots of the Black Ops series to date, with glimpses of Alex Mason, zombies, and the Specialists of Black Ops 3. But there are a few noteworthy things to pick apart in this fleeting reveal.

Let's start with some optimism: the tagline "Forget what you know." Could this mean that Black Ops 4 will go so far into the future of warfare as to include time travel, letting you retcon the storied history of the Black Ops series? Or maybe it's another play on the unreliable narrator and hallucinations of the original Black Ops? Time will tell (pun not intended but retained).

But what really gets me is the sheer hilarity of how starkly unexciting the logo reveal was. The livestream on Call of Duty's official Twitch channel had its fair share of false starts, with video cutting in and out erratically (hey, technical difficulties happen - we've all been there). Then, when a clear signal was established, around 12,000 giddy viewers were treated to roughly five straight minutes of mundane metalworking. Three people welded the logo we'd already seen out of a giant slab of metal for what seemed like an eternity, as the chat filled with cries of "stop wasting my time," "boring af," and the Residentsleeper emoji. Granted, that could probably be said for just about any livestream with those kinds of numbers. Also, is it just me, or is the finished product a tad crooked? Not that I could do any better.

You can watch the grueling reveal in its entirety above, or just skip to the last minute for the goods. We'll have more to actually dig into when Call of Duty: Black Ops 4 is fully revealed on May 17.