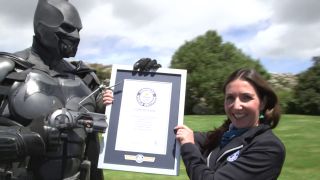 Cosplaying has long been a favourite pastime of genre fans, and while we've seen many an impressive costume at San Diego Comic Con and the like Julian Checkley may have just outdone them all. In addition to making a Batman: Arkham Origins inspired Batsuit, the Irishman - who has worked in the film industry in both the model-making and creature effects departments - built 23 functional gadgets, in doing so earning a Guiness World Record.

Watch how Checkley and his team did it in the video below...

The gadgetry that Checkley built includes familiar Bat-accessories like the grapnel gun, smoke bombs, and batarangs, but it's the Bat-flask that's undoubtedly the highlight of the suit (and probably the gadget that will be getting the biggest workout in light of this news). It's impressive stuff, and something tells me this record won't be broken anytime soon. Check out the complete list of Checkley's inventory below: