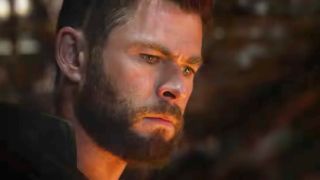 I am… crying. The biggest, most inevitable death in Avengers: Endgame has been given a new lease of life thanks to a newly-released Avengers: Endgame deleted scene. Spoilers, of course, follow, but it’s worth watching just to see what didn’t make it into the gargantuan three-hour runtime. That’s without taking into account the attached joke, which means it was probably an easy cut rather than an overly agonising decision.

As you may have guessed, the deleted scene in question (via USA Today) revolves around Tony Stark’s final moments. As Iron Man, he vanquished Thanos with a snap of his fingers and, where the original Endgame scene saw him surrounded by Pepper, War Machine, and Peter Parker, the alternate version goes in another direction entirely. Watch it now:

We have an EXCLUSIVE @Avengers deleted scene from #Endgame that gives fans a heroic must-see moment → https://t.co/Y0tiB90wX7 pic.twitter.com/QZDxovUCT2July 26, 2019

So, instead of Iron Man going out on his back with his loved ones around him, the Avengers: Endgame deleted scene sees much of Earth’s Mightiest Heroes come together to mourn the founding father of the MCU by kneeling to honour their fallen comrade.

Hawkeye kneels. Then Black Panther. Then Captain Marvel. The Guardians of the Galaxy (who, lest we forget, barely know the guy) kneel too. It’s all a bit much – and instantly trumped by the later funeral scene, which was more of a celebration than a cookie-cutter symbolic gesture.

Plus, there’s that Gamora moment. Walking away entirely – yes, she’s still her evil 2014 self – is a bit odd given the circumstances. If it was meant as a joke to ease the tension, it doesn’t quite land, though it’s still in keeping with her character. Still, it’s a worthy send-off to Robert Downey Jr.’s character, and if anyone deserves such a big character moment, it’s Iron Man.

With the home release out in the US this week, there’s bound to be more Endgame deleted scenes worth poring over. But they probably won’t make us quite as emotional as this.

Does Endgame take top spot? Here's a complete ranking of the best superhero movies around.