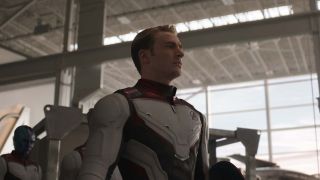 Avengers: Endgame contained a lot of complicated time travel stuff, especially when people started messing with their own past and killing people without the usual butterfly effects in the future. It’s not a movie where the Grandfather paradox (kill your Grandfather and you will no longer exist as your Dad will never be born) stands up. The question is, how do you explain to a generation raised on cause and effect time travel, that those rules don’t work here? Obviously by referencing one of the most beloved time travel movies of all time: Back To The Future.

I recently got a chance to talk to the co-writer of all three Back To The Future movies, Bob Gale, as part of a promo tour for Framing John DeLorean, a documentary on the creator of the movies’ famous car (out now on Digital Download) and I asked him how he felt about seeing his work in the MCU?

“I’m amazed,” he laughs. “You can’t be more flattered than to know that the biggest movie ever depends on Back to the Future for the audience to understand what the heck is going on. That’s pretty cool.” However, while Endgame uses Gale’s work to explain its time travel plot, the Marvel movie actually has a totally different take on how time travel works. In Endgame, when you go into the past, that past becomes your present. The future you just came from then becomes your past relative to you. So characters can make massive changes - like killing people and stealing things - without breaking the future; a big difference from Back To The Future’s take on time travel.

“We said if you can change the past, you change the future, and we stuck with that,” explains Galel. “Ray Bradbury did it in his famous short story A Sound of Thunder, which was the story that gave us the idea of the butterfly effect. That was one of the greatest time travel stories ever [and] was a big influence on us.” Endgame, on the other hand, has a version of time travel that allows the changes its characters cause, and experience, to coexist.

For example, Nebula kills her past self but continues to exist; Captain America and Tony Stark trample all over the end of the first Avengers movie without anyone fading from a photo. It might fly in the face Gale’s original work, but it’s not something he hasn’t considered: “People wonder [about] the end of Back to the Future - Marty comes back and the world is a little different for him. His father is a famous author, not the nerd that got picked on. What does Marty remember about his past? Does he remember the past where his dad was a nerd? Does he have new memories of this?”

More interestingly, are there other versions of Marty McFly? “Are there infinite universes?” muses Gale. “Sure. Why not? That’s the definition of infinity, right? It can just go on and on and on and on. Is it possible that there’s an entire universe and the only difference between that universe and ours is that I’m wearing a black t-shirt right now instead of a grey one?”

The idea of multiple universes leads neatly into another connection between the Marvel Cinematic Universe and Gale’s previous work. Gale has previously written for comics like Ant-Man and Spider-Man, as well as working on a script for a Doctor Strange movie that never came to be. “I grew up reading Marvel comics in the ‘60s,” he says. “They were the best. So when I had the opportunity to sign on and do a couple of drafts of Doctor Strange and Stan Lee was involved in it, I said there’s no way I’m not going to get involved in a project where I get to work with Stan Lee’.” He has fond memories of the man, too. “It turned out that he was just an absolute joy to be around, and he had great ideas, and was just a great man.”

While it was a different story to the eventual MCU version starring Benedict Cumberbatch, there were similarities according to Gale. “We had Dormammu coming over to our universe, and trying to subjugate everybody with the assistance of Mordo, who was always depicted in the comics at that time as the villain.” If you think it sounds familiar to the movie Marvel eventually made, so does Gale. “There were elements of my script that ended up in the movie [but] the Writers’ Guild decided there weren’t enough of them that entitled me to get a screen credit on it.” Aside from that, however, Gale thought “the first half of the movie was really accurate to the comics”. Although he’s not, ironically, a fan of the time travel at the end. “Once they start using time travel to solve problems, I have a real problem with that [laughs]. That’s lazy. Figure out another way.”