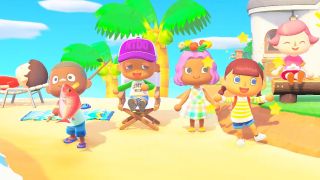 At E3 2019, Nintendo casually mentioned that Animal Crossing: New Horizons wouldn't support multiple islands, but the wording given at the time left some room for optimism. Sadly, an updated usability clause which resurfaced in the shadow of that new custom Animal Crossing Switch affirms that, yes, you only get one island per console.

"Please note: only one island can exist per Nintendo Switch console, irrespective of the number of user accounts registered to or copies of the game used on one console," the fine print reads. "One Nintendo Switch and one copy of the game is required for each unique island."

Many Animal Crossing fans had hoped that, with the new game launching on a console which supports multiple users - unlike the GameCube and 3DS - New Horizons would allow players to make multiple islands on different profiles. That doesn't seem to be the case, and you can't get around this by swapping SD cards since save data is stored internally. If you want access to multiple islands, you'll need to get a second console, which feels weird in 2020.

This is by no means a deal-breaking limitation, but it is a limitation I imagine many players - especially those who share a Switch, or indeed have children who share one system - would be happier without. If you do share a system, you can still create your own characters, but you'll wind up sharing an island, which is a bit of a bummer. Imagine if your friend or roommate could make another island on your console, and you could sail to and tour their island in your game. Alas.

These are the cheapest Animal Cross: New Horizons pre-order options.