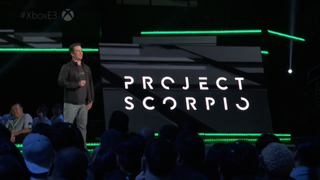 So it sounds like Project Scorpio is going to have some serious oomph behind it power wise. In an interview with USA Today Microsoft Studios Publishing general manager Shannon Loftis has said that "Any games we're making that we're launching in the Scorpio time frame, we're making sure they can natively render at 4K."

That's no mean feat. There's been a lot of discussion around 4K gaming as the upcoming PS4 Pro does output at 4K but after an upscaling process rather than natively processing the resolution. Sony executive Andrew House hasn't ruled out 4K native gaming entirely but currently PS4 Pro upscales for higher resolution televisions.

It's also much easier for Microsoft to currently say that the Project Scorpio will run games natively at 4K as it's currently a year away and will run on as yet unnamed new graphics processors. Regardless of it being future tech, there's still the issue of true 4K gaming being exceptionally expensive. Current PC graphics cards that deliver a 4K experience will set you back hundreds of pounds just for the GPU so it'll be interesting to see how Xbox Scorpio balances that. Add in presumably Oculus Rift based VR support and it's going to need a hell of a lot of power under the bonnet.