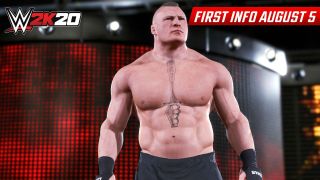 WWE gaming and its community haven't always made for the happiest of tag partners, so it's fitting that WWE 2K20 has just been confirmed without really confirming anything. Cover star? Nope. Release date? Nope. Announcement that more announcements are coming soon? Uh, yes.

This afternoon 2K dropped two WWE 2K20 screenshots on the series' official Twitter feed: a lunk-shouldered close-up of Brock Lesnar, and rear-view image of Bayley's ring entrance. The pics and accompanying words push hard that the first concrete game info is coming on 5 August, with Becky Lynch ticketed by most to be the WWE 2K20 cover star.

Long-overdue confirmation that WWE 2K20 is coming is welcome, but hardly a surprise – and the choice of athletes for the first screenshots is underwhelming. Lesnar and Bayley are great, but both were certainties for a WWE 2K20 roster spot long ago. A more intriguing selection would have been Hulk Hogan, if rumours that he's to be this year's pre-order DLC offering are accurate. Guess we'll know in just under a week's time.

2K has been curiously tight-lipped on WWE 2K20 throughout the summer. Sasha Banks was said to be working on the new game amid a multi-month absence from real WWE, and whispers of a bigger presence from the new WWE UK brand would make sense. But the official Twitter feed has remained resolutely focussed on WWE 2K19, until today. That should change from this moment onwards.

WWE 2K20 is out later this year. Wondering who won't be in it? Then check out 15 wrestlers you’ll never see again in a WWE game.