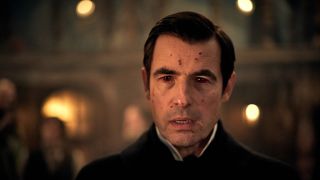 Did you catch the BBC's new three-part adaptation of Bram Stoker's classic Dracula? If not, you missed out. The work of Sherlock team Mark Gatiss and Steven Moffat, it's a faithful adaptation in many ways –  1897 setting, creepy castle, cloak, bats... – but also boasts some audacious twists. And Danish actor Claes Bang is outstanding as the Count.

The series is now coming to home entertainment formats to buy and keep. Bonus features include 25 minutes of featurettes on subjects such as the sets, the monstrous effects and the score, as well as a fascinating commentary on part three by the showrunners, their producer, and the production designer.

Dracula is available on Blu-ray and DVD from Monday 3 February. Thanks to the BBC we have five Blu-ray copies to give away. To put your name in the hat for the chance to win one, simply answer the question below.