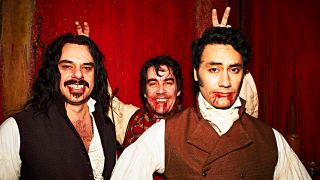 We've known for a while that What We Do in the Shadows - the cult vampire comedy conceived by Jermaine Clement and Thor: Ragnarok director Taika Waititi - would be getting a werewolf-focused sequel titled 'We're Wolves', but today brings news (via Radio New Zealand) that a TV spin-off is in the works too.

The show - which will consist of six 30 minute episodes - will be called 'Paranormal Event Response Unit', and it will focus on the two police officers from the original film as they protect people "from supernatural phenomena".

The cops from Shadows are getting their own TV show. Think Mulder & Scully but in a country where nothing happens.https://t.co/fxYQhheWPGSeptember 30, 2016

For now the show will only be airing in New Zealand on TVNZ 2, but given the popularity of What We Do in the Shadows it surely won't be long before it's shown in international territories. Watch this space...