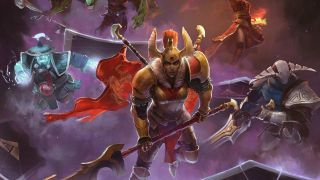 Hearthstone and Elder Scrolls Legends should prepare for battle, because Valve's new fantasy card game has a release date. Artifact will launch on Steam on November 28.

If you've missed the hype, the TLDR is that Valve has been hard at work on its first entry into the card game genre, showing it off to journalists back in March. The game was created by famed Magic the Gathering designer Richard Garﬁeld, and Dota 2 fans will recognize the champions and magic that make up its inspiration. Valve is promising "the deepest gameplay and highest fidelity experience ever in a fantasy card game." Artifact will launch for $20 with over 280 cards, and players can build their collection by purchasing new cards on the Steam Community Market.

Our friends over at PC Gamer said that going hands-on with Artifact's decks was like "managing three games of Hearthstone at once, each of which can affect the other in multiple ways which are changing from moment to moment. Or, to put it another way, if conventional card games are like chess (which I know they aren't), then Artifact is the 3D version which Spock plays on the Enterprise."

Valve is taking Artifact to PAX West later this month, so you'll be hearing more about it very soon.

For a cautionary tale of what life is like when you're consumed by cards, read about the experience of chasing Hearthstone's Legend rank.