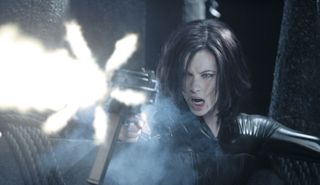 Few would have predicted that the Underworld franchise would make it to five movies back when we were first introduced to Kate Beckinsale's leather-clad Selene in 2003, and yet here we are.

The first trailer for the upcoming movie - which is somewhat of a Game of Thrones reunion, what with a cast that includes alumni such as Charles Dance, Tobias Menzies, and Lara Pulver - reveals that Vampires are still at war with the Lycans, who need Selene's blood to make them invincible.

If you've watched any film in the Underworld franchise then you know what to expect by now; Dark visuals, dialogue such as "I fear more blood will be spilled than ever before", and lots of Beckinsale looking good while kicking ass. There's plenty of the latter in the trailer, and we'll see if that selling point is enough to get a sixth film green-lit when Underworld: Blood Wars arrives in cinemas next year.