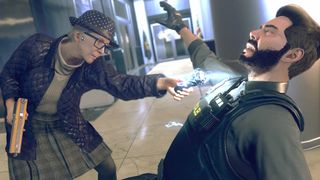 Ubisoft has given more details to the big plans it has for putting out five triple-A games in its next financial year, and they're exciting even if you have no idea what a financial year is.

The company previously confirmed that Watch Dogs Legion, Rainbow Six Quarantine, Gods & Monsters, and two unannounced projects would all arrive in its next financial year, and that all of them would support both current-gen and next-gen consoles. In a conference call with investors and analysts today, Ubisoft further clarified that three of those games will arrive by the end of 2020 - that's calendar year 2020, so by December 31 - and the other two will follow by March 31, 2021.

Ubisoft also revealed that the two unannounced titles will be new entries in some of its biggest existing franchises. Before you spend too much time speculating about what sort of series that Ubisoft could be planning on bringing back, Kotaku reporter Jason Schreier has already said that they'll be Assassin's Creed and Far Cry. He has a solid track record regarding these kinds of leaks, so that's probably what they're gonna be.

Anyone holding out hope for Splinter Cell is, once again, going to be disappointed. Sorry! (It’s AC and Far Cry.) https://t.co/7hKDV3y5QSFebruary 6, 2020

The accompanying Ubisoft financial report included a statement from CEO Yves Guillemot, where he acknowledged that the company's in a fairly quiet place now after all the delays - aside from continued success for Rainbow Six Siege and Assassin's Creed Odyssey - but he says that's all going to change soon.

"We have evolved our organizational structure in recent months in order to strengthen our focus on high-potential titles, and we are very excited about the idea of releasing five new AAA games in 2020-21," Guillemot said in the report. "Although the competitive environment is looking especially tough, production of these games is progressing well and each of them comes with great features that set them apart."

See what you'll definitely be able to play by the end of the year in our guide to the upcoming games of 2020.