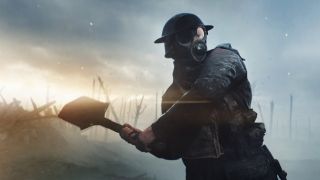 If you found yourself thinking "Battlefield 1 is great and all, but I wish it had more claustrophobic struggle and death," the game's first DLC expansion has your weirdly specific number. Developer DICE shared some new concept art and information about "They Shall Not Pass", including the fact that it takes inspiration from the Battle of Verdun's protracted, brutal struggle within the reinforced depths of Fort Vaux.

But it's not all poison gas and flamethrowers deep underground. Back on the surface, players will be able to take part in "massive French tank assaults" inspired by the Battle of Soissons near the end of the war. The new set of maps will show the push and pull over tactically significant bridges over the Aisne River, and it sounds like a new behemoth type might be on the way as well: "something big lurks around the village of Fismes". Or maybe it's another giant shark.

Here are some more pieces of concept art that should give you an idea of what DICE is going for with They Shall Not Pass. You'll want to wear your flame-retardant uniform.