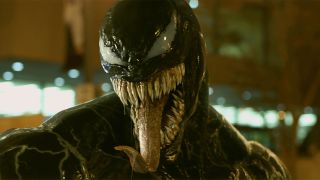 Venom has always been one of the most popular antiheroes in the Marvel stable, but he didn’t exactly fulfil his big-screen potential in Spider-Man 3, his only movie apperance to date.

That’s all set to change, with Tom Hardy playing Eddie Brock (and his snarling symbiote side) in Sony’s upcoming movie. With Venom taking centre stage here, rather than being relegated to ‘supporting villain’ duties, the film will explore his split personality, head-chomping tendencies and dark sense of humour, if the Venom Comic Con footage is anything to go by.

Read more: Venom review: "A decent buddy actioner. You might even laugh your head off"

Setting up the character independently from Spider-Man, the film is an origin story for Hardy’s tenacious journalist Eddie Brock, whose investigation into the mysterious (and probably nefarious) Life Foundation leads him into contact with the aforementioned alien symbiote, which takes residence in his body, with a number of alarming side effects….

You can see Brock starting to react to this new stage in his life in this exclusive image, courtesy of our sister publication Total Film magazine, as he starts to discover new strength while fighting off mysterious assailants who are suddenly very interested in him. Take a look below…

That duality at the core of the character isn’t something unfamiliar to Hardy, and that warring internal double act was key to the attraction for him. “For me, it was the multiple personalities, because to play that, on a kind of epic level, a superhero level, that was the big draw,” he tells Total Film. “I was like, ‘This is a great character, because he’s a diverse antihero. He’s not a good guy, and he’s not a bad guy.’ He’s connected to this alien who’s not from this planet. They’ve got to figure out an ethical framework between the two of them, and neither of them are run-of-the-mill types. There’s this kind of Odd Couple [relationship] between the two of them. I enjoyed the Jekyll and Hyde nature of that, in a superhero world.”

No, the Venom movie doesn't need Spider-Man - and here's why

Hardy’s reputation for intense and conflicted characters made him the ideal pick for the role according to director Ruben Fleischer. “Tom brings so much complexity, and I would say danger, to the roles and characters he plays,” he says. “Those are two inherent qualities of Eddie Brock and Venom, the complexity and the menace. So getting to watch Tom live between these two characters who are sharing a body and having to navigate these two forces simultaneously was really impressive and fun to watch.”

For more on Venom, including more from Hardy, Fleischer, Riz Ahmed, and Michelle Williams, pick up this month’s Total Film magazine, which hits shelves August 24. Better yet, why not subscribe and never miss an issue? Doing so will net you a fancy (not to mention exclusive) subscriber’s cover each month, such as the Venom one below, which current subscribers will already have their hands on.

Plus, My Favourite Magazines will deliver each new issue through your letterbox before it hits stores, and you’ll also save money on the cover price. What are you waiting for?