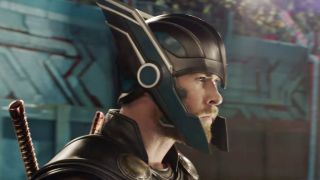 If you're not particularly well-versed in Norse mythology, you might be a little confused by the word that follows Thor's name in Thor: Ragnarok. Put simply, it's a series of apocalyptic events signifying the death of the gods and the end of the world. But to director Taiki Waititi, it means a change to the direction of the movies and character as much as it means world-ending threats.

"We do a lot to this character in this film. And you know, a lot of people have been wanting to see this idea of Ragnarok. A lot of people are excited by the idea of what Ragnarok means. But to me, it means stripping down the establishment of what’s already there, and then building it up in a new way. Which is almost like this cyclic idea of Ragnarok."

That's a good point brought up by Waititi - while it's easy to fixate on the whole end-of-the-world part of Ragnarok, the prophecy also says that it will function as a new beginning. The world is supposedly consumed by water at the end of Ragnarok, but those waters are said to recede so that a new earth can blossom. It sounds like Waititi wants to do the same to the Thor franchise and character: break him down so he can be built back up.

"So there’s my own personal idea of Ragnarok: what we’re doing to the character and to the franchise, and to the story. But in a way where what comes out the other end is way more exciting and interesting. And in a way, you can never go back from that."

That last sentence should be particularly exciting to speculate on. If you're an optimist, you could say that Thor can never go back to being the (admittedly handsome and charming, but also fairly vanilla) hero he used to be. If you're a pessimist, you might think Waititi literally means Thor can't go back to Asgard because the gods are dead and gone. Personally, I'm a Hulkist, so when all else fails, I say SMASH.