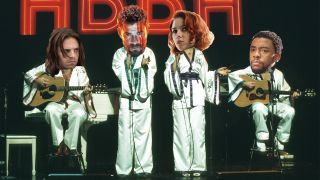 Marvel fans are the best. As proven by the fact that they've started putting MCU fight scenes to ABBA music and IT'S THE BEST THING EVER. First brought to our attention by the lovely team over at The Mary Sue, clips featuring the Avengers and other Marvel characters fighting to the tune of Mamma Mia, Dancing Queen, and more have flooded Twitter and YouTube.

Ever wanted to see The Winter Solider and Cap face off to the background beat of Lay All Your Love on Me? Fancy watching Thor kick arse while getting down to Dancing Queen? What about an emotional Civil War montage set to the tune of The Winner Takes it All? It's all here, plus so much more and it'll have you laughing, crying, and dancing!

If you're not convinced that Marvel fights scenes and ABBA music go together like peanut butter and jelly, watch some of the best mash-ups below and get ready to sign the upcoming petition for a MCU Mammia Mia spin-off.

First up, here's Cap trying to contain The Winter Solider while jamming to Lay All Your Love on Me:

a tumblr user set the fight scene in winter soldier to abba and there is truly no dignified way to tell you all i almost wet my pants laughing https://t.co/vC8QVO3Pl7July 3, 2018

Think about the fight scene on the Bifrost bridge in Thor: Ragnarok... now imagine Dancing Queen playing in the background!

Thor: Rangarok but instead of Immigrant Song it's Dancing Queen by Abba pic.twitter.com/VB69PNl2ilAugust 8, 2018

The Winner Takes it All is the perfect theme to Cap and Iron Man's break-up...

Another emotional one for you - watch Bucky fall to his 'death' to the tune of S.O.S

Hi. Here is Bucky Barnes falling to his death set to S.O.S by ABBA. pic.twitter.com/Haj6EvQhcMSeptember 6, 2018

Not a Dancing Queen fan? Try Thor: Ragnarok with Does Your Mother Know...

Black Panther doesn't want to be left out. Here he is fighting to Dancing Queen:

And finally, how about a slow, emotional version of Dancing Queen set to the heart-breaking Infinity War ending?

Looking for more Marvel goodness? Why not check out the best Marvel movies ever as we try to rank every MCU film released so far, as well as the new Marvel movies coming soon.