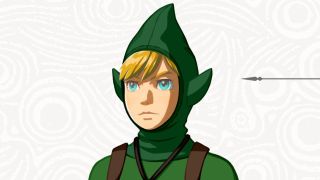 The Legend of Zelda: Breath of the Wild's first DLC pack will arrive on June 30. So how much storage space will you need to keep clear in order to try out the new challenge rooms, difficulty mode, and bonus items (like the above Tingle outfit) of The Master Trials? Assuming you're playing on Nintendo Switch, not too much - just 456MB for the Japanese version, according to this image spotted by Reddit user tonicodrea. International versions probably won't diverge much from that figure.

Assuming you have a decent-sized MicroSD card for your Nintendo Switch, 456MB should be no trouble at all. You'll probably even be fine just with system storage assuming you don't have a bunch of downloadable games installed. The Wii U version of The Master Trials, though, that's gonna take up a whole 3.7GB. No idea why there's such a big difference - the full game itself is nearly the same download size (about 13GB) on either console.

If you aren't sure what all this Master Trials business is about, you can catch up with this gameplay preview from Nintendo's E3 2017 presentations.

For more open-air excellence, read about how Zelda: Breath of the Wild is shaping the future of games.