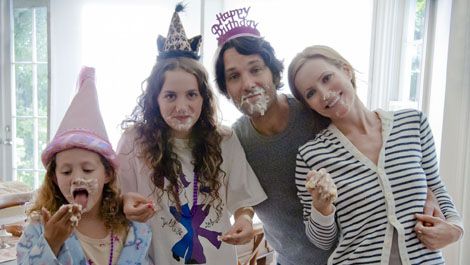 Climbing back into the the director’s chair for this quasi-sequel to Knocked Up , Judd Apatow offers a slice-of-life take on a quarrelling (but still in lurve) couple in the week they both turn 40.

Positioning This Is 40 bang in the middle of his all-out raunch-fests and the grown-up comedy of Funny People , the further adventures of Pete (Paul Rudd) and Debbie (Leslie Mann) examines universal topics such as midlife angst, marital strife, career anxiety and families both nuclear and non.

Ha-has and emotional heft, hand in hand. And, for the most part, Apatow’s approach pays dividends.

Which isn’t to say there isn’t self-indulgence in This Is 40 (it’s too long, for one; not knowing when to let go remains the filmmaker’s Achilles heel).

As the film’s crisis-prone fulcrum, Pete and Debbie are stressed-out marrieds who squabble over his secret iPad sessions in the loo, her oblivious approach to family finances, his mooching father (Albert Brooks), her distant, crusty one (John Lithgow).

Apatow’s real-life daughters Maude and Iris get expanded screen time, too; the fact that they’re both ace and get to swear spares family blushes.

Apatow also goes for relevance, sewing the US’ economic downturn into his film’s fabric via the financial woes of Pete’s indie record label and Debbie’s posh boutique (staffed by Megan Fox and Charlyne Yi).

It’s Bridesmaids ’ Melissa McCarthy, though, who puts in another show-stealing turn as an angry parent who clashes with Rudd and Mann (don’t miss the end credits).

Conspicuous by their absence are Seth Rogen and Katherine Heigl, but after the latter slammed Knocked Up for painting its women as shrews, it’s unlikely Apatow was going to ask her back.

He hasn’t taken her blasts to heart, either: Mann’s brittleness is still front and centre, although fleshing out her screen time does more justice to her foibles.

Sure, many will find Apatow’s obsessions way too middle-class cosy and awash in therapy speak, but his nimble comic brain lands an array of bullseye moments that will resonate with anyone who’s entered the messy vortex of modern-day relationships.