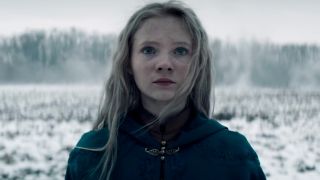 The Witcher Netflix series showrunner has revealed her original pitch for the upcoming season. In what would have been a dramatic retooling of the source material, Lauren S. Hissrich planned to have Ciri, not Geralt, as the main “focal” character, with the character also acting as narrator.

“When I was first pitching to Netflix, I pitched them a completely different version of the story which I’ve actually never talked about before,” Hissrich reveals in a recent Netflix featurette on The Witcher.

“I pitched them a version of the story which actually started with the second-to-last book [in writer Andrzej Sapkowski’s series], which is Lady of the Lake. Ciri ends up sitting by a lake, meeting with a man, and sort of telling her story.” She added: “I started with that narrative structure, which is to have Ciri be our focal character and be kind of our narrator.”

But Hissrich soon found an issue with that style of setup: not enough Geralt. “The problem was… that I wasn’t getting enough of Geralt and his perspective, because it was all being told through Ciri,” Hissrich explains. “I went through several versions, and I literally had one of those ‘aha!’ moments in the shower, jumped out of the shower and said to my husband ‘does this make sense? Can I tell all three of these stories at the same time and not have it be too confusing?’”

Now, we have the prospect of the three core characters (and stories) of Geralt, Ciri, and Yennefer being presented at once – but it could have ended up very differently.

All eight episodes of Witcher season one will be available on Netflix worldwide from Friday, December 20.

Need something to add to your watchlist? Here are the best shows on Netflix.