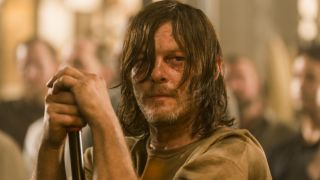 You’ve probably only just got Easy Street – the song used to torture Daryl (and the rest of us) in episode 3 of The Walking Dead season 7 – out of your heads but, sorry, it’s about to become a catchy earworm yet again. Especially as it turns out to be a bit of a continuity error.

Kudos to ComicBook.com for pointing out that Easy Street by the Collapsable Hearts Club was actually released on iTunes November 4, 2016, six years after the show first aired. With the show presumably taking place (roughly) in real-time up until now, just how did Dwight get his hands on a recording of a song that came out so long after the dead started to walk?

It could be easy to dismiss it as just another use of contemporary music in the show’s soundtrack, but Daryl hears it over and over and over in ‘real life’. My theory? The producers were entranced Hypnotoad-style and were forced to put it in, causing a continuity error.

Besides, I can’t think of any big events that have happened recently that would cause the downfall of civilisation as we know it…