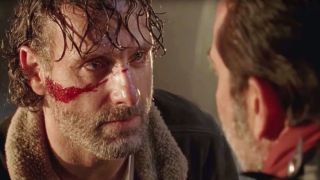 It’s hard to believe that The Walking Dead season 7 returns in less than a week but here we are. We already know that the second half of the season will deal with Rick and the rest of the survivors rising up against Negan but that’s easier said than done. However, one of the show’s executive producers think they’re more than ready to take it to Negan (and Lucille, obv).

During an AMC Q&A, EP Gale Anne Hurd, who has already spoken about where the characters’ heads are at in The Walking Dead season 7, was asked whether the survivors are ready to face off with Negan because of, y’know, the last time they tried something where Abraham and Glenn ended up meeting home-run endings courtesy of Lucille.

Hurd, though, was emphatic in her response: “Absolutely [they’re ready]. The survivors not only want to rise up, they’re going to take it to Negan,” before laying out the roadmap for the show’s immediate future, “They need a few things. They need to enlist compatriots who are going to go to war with them and they also need weapons because, sadly, I don’t think they have enough of either. I think we’re going to see them solve that problem – or at least attempt to.”

Hurd choosing to end on ‘attempt’ rather than anything more clear-cut seems to stem from the confidence of someone who has probably seen the remaining eight episodes. Negan surely isn’t going down that easily… right?

The Walking Dead season 7 returns to AMC on February 12.