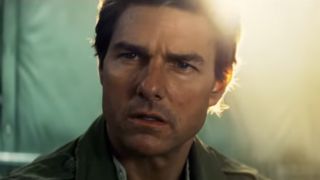 That new trailer for The Mummy is a lot less slick if you forget to edit in the dramatic music. An incomplete version of the trailer was reportedly uploaded to IMAX's official accounts and the internet was instantly delighted at this Christmas miracle of unintentional absurdity. Have you ever wanted to hear Tom Cruise scream at nothing three times in a row? Watch.

Nothing will top that initial high of hearing a single, lonely Goldeneye 007 "grunt" sound effect when a bat slams into a pilot at 500 miles per hour. But these reactions from Twitter come close.

People couldn't get over those screams

The accidental IMAX upload of The Mummy trailer without sound effects is amazing and this Tom Cruise screen is DEFINITELY the best part pic.twitter.com/IdDgZSn1tgDecember 20, 2016

i have been trying to figure out what this sound effect is supposed to be for like ten minutes pic.twitter.com/xyXzpspk7nDecember 20, 2016

While others offered their own interpretations

New trailer for The Mummy https://t.co/FtTuCOfxLaDecember 20, 2016

new party game: gather some friends and make your own foley sounds for the Mummy trailerDecember 20, 2016