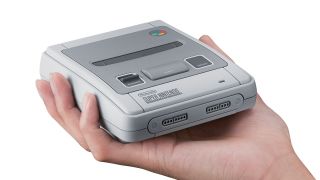 One of the most notable inclusions on the list is Star Fox 2 - which has never been released before. So hey, it only took 20 years, but it's finally happening! You will have to beat the first level of the original Star Fox to unlock it, but I'd say that's a small price to pay.

Also like its older sibling, the SNES Classic can be plugged directly into modern televisions via an HDMI cable. It also comes packaged with a second controller so you can enjoy the multiplayer games no fuss, no muss. About the only thing it doesn't come with is an AC adapter for its USB power cable, which it should be noted, is required.

One curiosity to note: there may be multiple versions of the SNES Classic. While the picture you see above is the version included in a Nintendo press release sent to our UK offices (which makes sense, as it's modeled after the EU and Japanese version of the original console), Nintendo of America is advertising a different model on its Twitter account:

You can pre-order the Mini SNES right now and check out our list of the best SNES games of all time, many of which come pre-loaded with Nintendo's retro console