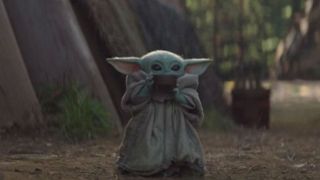 It's one The Mandalorian's biggest mysteries: who is Baby Yoda? The lean, green, Force-wielding machine has certainly captured hearts, minds, and more than a few memes across late 2019, but we still know very little about the creature, officially known as The Child.

A certain Mr. Taika Waititi, though, has thrown us all a speculation-shaped bone, hinting that we’ll find out more about Baby Yoda’s origins in an upcoming episode of The Mandalorian.

Waititi, who directed The Mandalorian season 1 finale and also starred as assassin/nurse droid IG-11, told The New York Times’ Kyle Buchanan overnight at the Golden Globes, “He’s not named Baby Yoda!” before teasing, “I’ll wait for [Mandalorian creator Jon] Favreau to give that away.”

I also asked Taika about Baby Yoda, since he directed the MANDALORIAN finale. “He’s not named Baby Yoda!” Taika insisted. There is a name yet to be revealed, and Taika knows it but won’t hint. “I’ll wait for Favreau to give that away.”January 6, 2020

That last line indicates that, yes, there is much still to be unravelled when it comes to Baby Yoda. Favreau himself has had to fend off speculation that Baby Yoda is related to the OG Yoda, telling USA Today, “Well, now you're getting into spoilers. I can't say. But there are a lot of theories about that,” before trailing off, perhaps mindful of the legions of Disney ninjas ready to pounce at any moment.

Any guesses? Yoda and Yaddle are the only names we know of The Child’s species, so it probably starts with a Y. What about Yolo? Or Yeezy? My pick: The Artist Formerly Known as Baby Yoda. Simple.

Find out how The Mandalorian fits in with all things a galaxy far, far away with our complete Star Wars timeline.