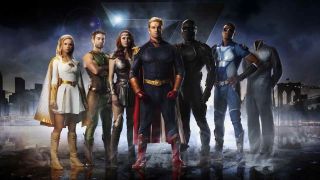 Death by head-crushing sex? Fine. Serious drug use? No big deal. The Boys season 1 isn’t afraid to push some super-powered boundaries, though the show’s co-creator has revealed that one scene was so gratuitously OTT and gross that it had to be cut by Amazon. Slight spoilers follow and fair warning: you might need a sick bag.

Eric Kripke recently took to Reddit to peel back the curtain and reveal some of the secrets behind the adult-themed superhero comic adaptation that debuted on Amazon Prime last month. Among the questions was: “What scene was cut from the show that you wish could have stayed in?”

It turns out, it was just the one scene that ended up on the cutting room floor. Kripke describes in excruciating detail the moment in the show’s second episode where The Seven Leader, Homelander, and the corporate stooge Madelyn Stilwell have a war of words in Stilwell’s office.

Are you ready? It’s (st)icky as all hell.

“After being dressed down by Stilwell… [Homelander] was standing on one of the Chrysler building Eagles,” Kripke explains. “He pulled his pants down and started jerking off, mumbling ‘I can do whatever I want’ over and over again until he climaxed all over New York City.”

Yes, they even shot it, for lack of a better phrase. Kripke continued: “Oh my God, Anthony was the BEST in that scene. Amazon seemed to think it wasn't necessary. I thought it told me something about his psyche. To be clear, they've been great, that may have been the ONLY fight I lost in Season 1.”

If that scene isn’t included on some bonus features somewhere under the heading ‘What’s so funny about truth, justice, and the American Spray?’ then that’s a serious missed opportunity…

Need more to watch on-the-go? Here are some of the best shows on Amazon Prime.