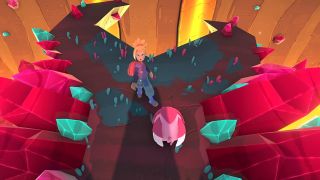 Your chances of catching a Temtem Luma, or Shiny to use the common parlance from that other game about collecting cute monsters, are about 1 in 6,000. It doesn't sound that bad - you encounter a good number of wild Temtem in any given play session and it's hardly Powerball odds.

But when you make that abstract ratio concrete and visualize the whole thing in one image, as presented by Reddit user Sethiro25… it's a bleak picture.

Update: The latest Temtem patch notes have decreased the odds of catching a Temtem Luma even further to 1 in 8,000. That said, you can have a better chance of finding one in the Temtem Saipark, and developer CremaGames says it's working on "an active way of hunting Luma" to improve your chances in a future update. Until then, just visualize the image below, but even bleaker.

That's 6,000 Toxolotl. The teensy, blue-ish blip just above and to the right of the center is the one Luma version waiting amidst all the others you are far, far more likely to see.

As far as we know, there's no Temtem equivalent of shiny chaining for Pokemon Sword and Shield shiny Pokemon. Your chances of encountering a shiny Temtem are always the same, no matter what you're after or how many times you've encountered the same creature before. Basically, it's about as random as throwing a dart at that picture (assuming you, like me, are terrible at darts).

None of this is to complain about the current state of Temtem Luma hunting. The game is still in Steam Early Access and developer CremaGames likely has some plans to make the process more accessible and rewarding. Besides, just like their Shiny inspiration, Luma are only for looks. There's no mechanical advantage to rocking an all-Luma squad, though it probably will make your PvP opponents do a double take.

As this new video sharing highlights from Twitch streamers reminds us, 1 in 6,000 does still happen.

Still, if you have your heart set on a Temtem Luma, you may want to keep that goal in the back of your mind while you do other stuff in-game. A watched Luma never shines, as they say in the proverb I just made up.

Personally, I'm very happy that Temtem only has about 80 creatures to catch right now, and I plan on pretending that their Luma versions are just urban legends.