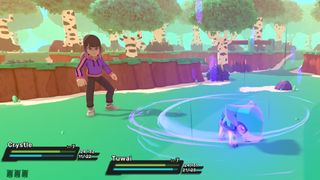 There's so much to do and discover in Crema's creature collecting MMO, and our list of Temtem tips is here to help you as you set out on your quest to become a true Temtem Tamer. If you're just about to get stuck into the adventure, be sure to check our guide to the best Temtem starters to help you decide which little creature is the right for one.

After you've got your starter, you'll be going up against a lot of other Tamers, so these tips will help you get to grips with Temtem's battle system and ensure you can be the most effective Temtem Tamer on the Airborne Archipelago.

There's a lot to unpack in the world of Temtem, and while there are lots of elements Pokemon fans may find quite familiar, the MMO presents its own challenges and features. With other Tamers to face, new areas to explore, and all manner of different Temtems to collect, we're here to help you hit the ground running.

1. Catch Temtem as soon as possible

After you get your starter Temtem from the lab, the good professor will give you some TemCards that you can use to catch some new creatures in the long grass, and it's best to catch some more Temtem as early as possible to build up your squad. For the most part, battles are 2 v 2, and it's easy to get knocked out early on if you don't heal up or have more Temtem to battle with on your squad.

2. Pay attention to your Stamina bar and use your moves wisely

Temtems have a Stamina metre that will deplete by a certain amount whenever you use moves. When you hover over an attack move or status effect, the stamina bar will flash to show you just how much of the Stamina bar it will use. If the Stamina gets depleted entirely, you can still use a move for another turn, but this will lead to Overexertion which damages your Temtem's health. When your Temtem is overexerted it also means that it will automatically sit out a turn.

3. You can decide when your Temtems rest during a battle

During battles you should see a little clock symbol - you use this to make your Temtem rest for a turn and recover some Stamina, so it's best to keep an eye on the Stamina and Health bars throughout the battle and strategically decide when it's best to sit out a turn so your Temtem can recover.

4. Some moves have different turn requirements and priorities

When you enter into a battle, you may notice that some moves are greyed out so you can't use them right away. Some status effect moves can have a hold value, which means that your Temtem has to be active during a set amount of turns before you can use the technique. An easy way to know how many turns a technique requires is to look at the amount of stripes on an attack. So if it has two stripes, for example, you won't be able to use the move until that Temtem has taken two turns.

Certain moves will also take priority in a battle, meaning it will be the move that takes place first. If you see a plus sign symbol on the top left corner of the move, this means it's a high priority move. For moves that don't, you can find out how high its priority is by right clicking on the move.

It's also good to note that Temtems that perform a technique that matches its type will gain a damage boost. So the starter Temtem Crystle, for example, will get a damage boost if it uses a Crystal type technique.

5. Pay attention to the colour of the attack circles

When you select a move and target an opposing Temtem, it's important to note the colour of the attack circle that appears. If the attack circle is red, it means the Temtem is resistant to that particular type of move, so you'll deal less damage. If you do still decide to perform the move, you'll notice a percentage will appear on screen to indicate that you have dealt 50% less damage than usual because it's not effective against the Temtem. Like Pokemon, certain Temtem types are more effective against certain types. So, for example, Fire is effective against Nature.

6. Try to make use of healing at home or in Temporiums to save on Balms

When you first start out and head off to the next area, you'll face a lot of battles against NPCs. Naturally, you'll be taking quite a bit of damage, and with a finite amount of Balms - the item you use to heal your Temtem - it's handy to know that if you return to your home in Zadar and speak to Aina, you can heal all of your Temtem at once.

As you progress, you'll come across Temporiums, which work in the same way as Poke Centers. In certain areas, you'll also encounter Mini Temporiums, which are like pop up healing stations in the wild areas that come in very handy after a lot of battling. Early on in the game, it's best to  make use of the Temporiums as often as possible and only use your Balms when you really need to.

7. Don't use the same Temtem repeatedly

Naturally you'll probably get quite attached to certain Temtem during your advenutres, but it's good to make use of every little creature on your squad to get the most out of battles. The experience your Temtem gains is dependent on the level of the opposing Temtem. So, if you repeatedly use the same two Temtem, eventually they'll become higher in level and will stop earning a lot of experience if you're battling lower level creatures. With this in mind, it's best to make use of all the Temtem in your squad and swap them out frequently to have a good balanced team that will benefit the most from the varying levels of the opposing teams.

8. Study up at the Accademia in Brical de Mar

When you reach the next area known as Brical de Mar as the Professor instructed, you come across the Accademia building. This is a great place to visit and get a run down on how certain aspects of battling and moves work. The building is made up of classrooms with books on the teachers desks that will tell you some useful information to help you gain a better understanding of abilities and battling.

9. Battle against your friends

If you have a pal Tamer running about the MMO world, you can add them as a friend by opening up the menu and selecting the two person symbol, and opening the Friends tab. There you'll be able to enter your friend's username ID with the Tamer search feature and send a friend request. It's also worth noting that you can interact with other players you see running around the area through this tab. Once your pal has accepted your friend request, you'll be able to challenge them to casual or competitive battles, and you can also inspect them to see a run down of their character and Temtem squad.

Want to know more? Read about how Temtem is both a love letter and a challenger to Pokemon.