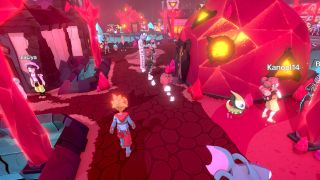 Temtem doesn't shy away from its biggest influence. On the contrary, developer Crema goes so far as to directly name-drop Pokemon in the first sentence of its upcoming creature-battler's Steam page. While the more cynical amongst us might be tempted to call Temtem a cheap imitation of Nintendo's juggernaut, the reality is a loving and respectful reinterpretation of a classic – one which is just as prepared to ask questions of its inspiration as it is to imitate it.

The opening of Temtem's story apes any Pokemon game you could care to name almost shot-for-shot. Your adventure begins in your childhood bedroom as your mother calls you down to meet your new rival and the professor who will help start you on your journey. You choose your starter, have a quick battle, and set off into the wild, fighting trainers and hunting for new Temtem in the long grass as you head off towards your next adventure.

The formula is evolving

These well-established story beats remain, but it's clear from the very start that Temtem wants to introduce a few iterative ideas to the genre. Character creation offers impressive customisation, rather than simply relying on the binary choice between male and female avatars. Your first fight, meanwhile, is used as an opportunity to explore power disparity and type matchups, putting you firmly in your place in the process. There's even a deeper RPG experience on offer than in any mainline Pokemon title, as the opening moments of the game introduce dialogue choices and side-quests that put the likes of Pallet Town and Postwick to shame.

As in Pokemon, the stars of the show are the creatures themselves. The game's changes to the traditional tropes of those opening moments are welcome, but this is a genre that lives and dies on players' attachments to the critters they collect. That hasn't escaped Crema's attention – the Temtem I discovered in the first few areas were adorable, but also recognisable. Nintendo and Game Freak have a twenty-year head-start, but that's not something Temtem's developers are ashamed of. As well as my starters, my early-game team featured a cute bird and a partially-cocooned bug. Both of those archetypes are firmly rooted in two decades of Pokemon games, but their presence here pays homage to that series while still managing to suit the needs of the new setting and its story – every Tamer need to start somewhere.

Once you've built up a team, battles are an obvious next step, and it's here that Crema really starts to ask questions of its biggest competitor. Double battles have always been a key part of the competitive Pokemon scene, but often play a somewhat diminished role within the games themselves. In Temtem, they're the main form of competition. even early scraps involve four creatures squaring off - just the start of a suite of changes that make battles here far more tactical than anything Nintendo has to offer. Your Temtem have a set amount of HP they can lose before they're no longer able to battle, as well as a stamina meter which is depleted with each action they make. More powerful moves are harder to pull off, and your Temtem start to lose HP if you overexert them, preventing you from relying solely on overpowered creatures or even convenient type matchups.

Temtem can take a break to recover some stamina, but the system also encourages players to swap more freely during the course of a battle, incentivising wider use of even the weakest members of your team. It's a decision that not only bolsters the relationships that are key to the genre, but adds an extra strategic layer to the entire fight. Other moves can require a turn to charge up, helping make sure that high-level Temtem can't just breeze through easier areas. It's a collection of ideas that never feels out of place, and drastically improves the game's tactical elements from even its opening moments.

The questions that Temtem asks of Pokemon are heard most loudly during its battles, but elsewhere it's happy to draw on ideas scattered throughout the series' history. There's something to be said for recent entries' streamlined approach to levelling, but so far in Temtem, there's not an eXP Share in sight, and I've enjoyed getting back to the grind. Rival Max is also a welcome addition, treading a compelling line between aggressive rivals like Blue and Silver and friendlier characters like May and Hop. These design choices show off the extent to which Temtem is a response to the Pokemon franchise as a whole, a game that draws on ideas from throughout its long history rather than a simple homage to its much-celebrated early days.

Temtem has a long way to go. Some big names have tried to jump on the Pokemon bandwagon over the years, and few of them have found even a fraction of Nintendo's success. Something feels different this time, though; Temtem is clearly the result of years of love and affection, but also isn't afraid to cast a critical eye over the genre where necessary. That willingness to acknowledge Pokemon's flaws puts Temtem in a unique position. Rather than placing itself in direct opposition with Nintendo, it's clear that Crema hopes to help improve the format as a whole, allowing both Temtem and Pokemon to thrive side by side.

Temtem is due to release Jan 21, 2020 for PC. If you can't wait, why not check out our best Pokemon games rankings.