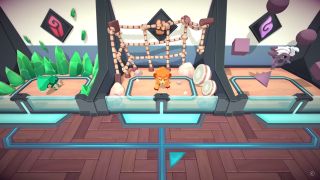 Aspects of each Temtem starter, like their type, what they’re strong and weak against, their stats, and how strong they are early in the game is explained below. With all that info, you’ll be sure to make the right choice for your squad. Bear in mind that regardless of what Temtem you pick, each pick is viable. Each Temtem has their own strengths and weaknesses, and none of them are drastically worse than the others in the early game.

One starter TemTem you can pick is Crystle, which resembles a small green crystalline turtle. While not remarkable at the start compared to the other two choices its type makes it a safe early pick, with the opportunity to learn some seriously powerful moves at later levels.

With that in mind here's some important things to know about this starter Temtem:

Your second option when picking a starter is Smazee, a small orange monkey who is the hardest hitting of the three Temtem. If you want a Temtem that can deal out some major damage, this is the one for you.

Here's what you need to know about it:

The final starter you can choose is Houchic. This purple humanoid Temtem is a fantastic choice due to its high damage potential with special attacks. A classic glass canon, Houchic is a great damage dealer but easily taken out due to low defensive stats.