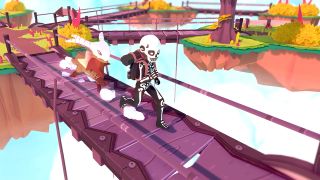 Temtem hit Steam Early Access last week with a simple premise: it's online Pokemon. That's the fundamental pitch, and it works. Or, rather, it works when there aren't server queues from huge swathes of players all trying to log in at once. Technical issues aside, subsets of the Pokemon community already seem optimistic that Temtem could one day be their new hobby of choice, if the developers can make good on their future plans and keep listening to player feedback. As for me, I'd even go so far to say that Temtem is exactly what I want from a Pokemon game right now.

The Temtem you can play in Early Access right now includes a roughly 20-hour chunk of the main campaign, three islands to visit, multiplayer features like duels and co-op battles, and some end-game centric activities like Temtem breeding and Luma (shiny) hunting. Compared to the breadth of things you can do in modern Pokemon games, that probably sounds anemic. But the last Pokemon game I played was Pokemon X, and I had to put it down. There was just too much of it.

Even before I'd caught enough Pokemon to fill up my squad screen in X, I was being deluged with systems and tutorials on how to use them. Here's how often I should pet my Froakie for its optimal development. Here's how I can use super training to make sure his EVs are on track. Here's how I can cut a promo reel for my Fletchinder to let other players see how cool it is. I'm sure there were a dozen more things to learn about and do even after I gave up somewhere in the darkened streets of Lumiose City (sorry about never fixing that power outage), and many more followed in the next two generations of Pokemon games.

Back when I was reading monthly issues Nintendo Power and vibrating out of my skull with excitement for Pokemon Red & Blue, I wanted to catch all 150 Pokemon. That was my singular goal. I wanted to become a Pokemon Master so badly. It was a big goal to work toward, but still an achievable one. Cut to two decades later and there are 400 Pokemon in Pokemon Sword & Shield. Four hundred. I understand that is now considered to be a low number.

Do you know how many Temtem there are in Early Access? About 80. Taming 80 Temtem is what I would call an attainable goal. At first I worried that catching all these unfamiliar monsters would feel hollow and artificial, like being the one kid on the playground who was deeply invested in Digimon. But so many Pokemon have been created since I memorized the Pokerap that I don't have any particular nostalgia for 90% of them. The only one I recognize who still shows up regularly is Pikachu, and let me confirm for the younger generations that Pikachu already felt played out pre-2000. I'm not trying to be the old guy shouting "Why do they keep making new things?" at the clouds. I'm just saying that, for all I know about Floette and Mudbray and Yamper, Paharo and Swali and Saipat might as well be Pokemon too.

Another 80 or so Temtem are meant to join the game by the time it leaves early access, along with many more things to do in the form of islands to explore, end-game activities to pursue, and player housing to decorate. I'm glad, because it seems like Temtem has the potential to grow into the game that hardcore Pokemon fans have been dreaming about. As for me, I'm going to savor the limited scale while it lasts. Hopefully I'll get far enough along that, when all the other creatures and features start pouring in, I'll be ready to greet them with enthusiasm instead of mounting confusion and dread.

For this very early period in Temtem's history, I'm happy. Even if it doesn't have "Pokemon" on the label, I'm playing the sort of game I've been wanting to get back to ever since the last time I hit the "Off" switch on my Game Boy Pocket. Spamming emotes at online strangers while I do it is just a bonus.

Find even more to play in our guide to the upcoming games of 2020 and beyond.

Connor Sheridan
Connor has been doing news and feature things for GamesRadar+ since 2012, which is suddenly a long time ago. How on earth did that happen?
See comments