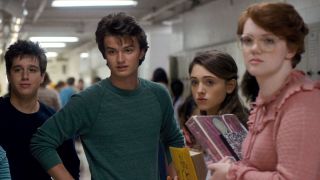 One day after news of a Stranger Things season 2 renewal and a batch of character profiles have landed for Hawkins' newest residents. The intel revealed in the descriptions, courtesy of THR, suggests that these latest recruits will fit into this small Indiana town no problem. The trio listed includes a tomboy, her older too-cool brother and a loner. Check them out:

"Max is a tough and confident 13-year-old female whose appearance, behavior and pursuits are more typical of boys than of girls in the era. She has a complicated history and a difficult relationship with her stepbrother, Billy, that's made her protective of her past and generally suspicious of those around her. She's also good on a skateboard, which she uses to get around pretty much everywhere."

"Billy is a super muscular, overconfident 17-year-old. He’s so captivating and edgy that there are rumors flying around that he killed someone at a school he attended in the past. Billy steals peoples’ girlfriends, is a drinking-game pro and drives a black Camaro. But his violent and unpredictable nature shows itself to those closest to him, especially to ones who are younger than he is."

"Roman, meanwhile, is described as a male or a female of any ethnicity between the ages of 30 and 38. After growing up homeless with a drug-addicted mother, he or she suffered a great loss at an early age and has been seeking revenge ever since. Roman is ultimately an outsider who doesn’t understand how to connect with people."

Fans of the Eleven may not be quite as ecstatic to read about Max, who sounds like she could easily replace the pint-sized superheroine from season 1. She stole the D&D crew's hearts and our own, so Max's got her work cut out for her. In any case, based on our detailed analysis on the season 2 teaser episode titles, she's probably going to show up in the season premiere. It's called Madmax.

As for her brother, he is perfect badboy material; maybe to lure Nancy away from Steve? But teen angst aside, Roman's got my attention here: could they be another child snatched by the government and experimented on like Elle was? They might even be the parent of one of those kids. Who knows, but the Duffer brothers have said that Matthew Modine's "papa" didn't perish in season 1, so that revenge may be aimed squarely at him.

Whatever bone Roman's got to pick, there's still the matter of the Upside Down. Could be that Roman lost someone to that eerie, parallel dimension, and by the brief plot synopsis included with the casting descriptions, we haven't seen the last of the monstrous demogorgon and his pals:

"When terrifying supernatural forces once again begin to affect Hawkins, they realize Will's disappearance was only the beginning. And so the adventure continues …"