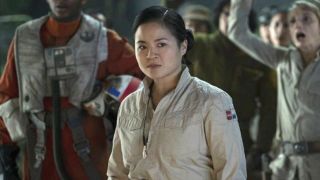 While opinions on Star Wars: The Rise of Skywalker were mixed among fans, most could agree that Kelly Marie Tran’s Rose Tico being pushed into the background after such a prominent role in The Last Jedi felt out-of-step with the franchise. The actress, however, has responded to fan criticism in a recent interview by saying she was happy with the overall role she played in a galaxy far, far away.

“When you’re in something of that calibre, there’s always people working to make something out of love, and no matter what you do, there’s always going to be people who aren’t happy with that,” Tran told MTV News during the Oscars 2020 red carpet.

Far from being unhappy about her time in the Star Wars universe, Tran said, “I’m really grateful that I got to be a part of it.”

When asked about her part specifically, Tran said: “I think that I’m just amazed at the way that [director] J.J. Abrams was able to sort of wrap up all these incredible stories. There were so many characters… I got to be part of something bigger than me and that’s something really special.”

While Tran didn’t bring up the possibility of some of her scenes being left on the cutting room floor, her co-star Dominic Monaghan recently called for a Rise of Skywalker extended cut and also revealed that “there was so much stuff filmed that didn’t make it to the theatrical version.”

Catch up on the 92nd Academy Awards with our Oscars 2020 recap, featuring all the major moments and talking points from this year’s show.