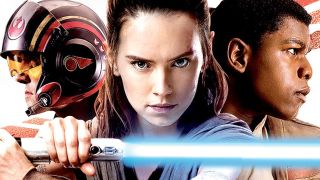 Dutch website Jedi Bibliothek (via Making Star Wars) has stumbled upon a very interesting Star Wars arts-and-crafts book that not only tells you how to create your own A-Wing model, but also features a lengthy description of Poe’s death-defying save to help Resistance HQ on D’Qar escape a swift First Order retaliation. No, I’m not making this up.

The description is as follows:

After Poe Dameron’s squadrons destroyed Starkiller Base, the First Order sought out the Resistance headquarters on the planet of D’Qar to enact their revenge. A-wings flew guard around the Resistance fleet and the transports fleeing the base. When three First Order warships emerged from hyperspace to attack, a squadron of A-wings, commanded by Tallie Lintra, assisted Poe Dameron and the Resistance’s assault bombers in taking on an enemy dreadnought.

So, what does that tell us? If it is the opening scene (chronologically, it would make sense to tie up this loose thread straight away), it will follow on immediately after Star Wars: The Force Awakens and will feature a great big space battle. The First Order will also be showing their might with a brutal response to an embarrassing defeat. Star Wars 8’s mantra seems to be go big or go home, which is fine by me.

Now, this might be a later scene or they could skip over this entirely and make reference to it in dialogue but, come on, who doesn’t want to see Poe swoop in and save the day in the opening ten minutes? I’m sure most fans would want to see Luke straight out of the gates but this pacing sounds much more frenetic and exciting. If this isn’t true I’m going to start smashing up every model A-wing I see…