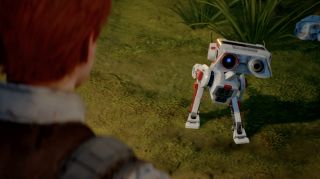 With Dark Souls influences and hub world structure some Star Wars Jedi: Fallen Order tips are in order to help you along. From combat to exploration there's a lot to work out as you jet through the stars, and that's without the metroidvania structure that means you can revisit old location with new powers at any point.

To help you level up from Padawan to a Jedi Master fast, and take on the Empire with confidence we've got 12 Star Wars Jedi: Fallen Order tips to bring you up to lightspeed with everything you need to know.

It might be tempting to hit the Square/B constantly when you first start taking enemies on, but that's going to leave you incredibly open to enemy attacks. Instead, look to block and parry attacks as much possible. Blocking will ensure you won't take any damage from most attacks, while parrying will create an opportunity for a one hit kill (or at least take off a large chunk of damage).

2. If an enemy glows red, attack or dodge

Enemies that glow red are showing you that they're about to do a massive, unblockable attack. Bad news, right? Not necessarily, as in the wind-up to them, they're vulnerable to attacks. Some you'll be able to land a few blows on, cancelling their attack. Others, you can use force powers to interrupt their animation and land a few strikes on them. If you're in doubt though, dodge away as fast as possible.

3. You can use health stims while blocking

If you just press up on the D-Pad when asking BD-1 for a health stim, you'll be leaving Cal open to an attack from enemies. However, if you hold down the block button, then request a stim, he'll automatically block any incoming attacks. You might have to request the stim again, as the block interrupts the healing, but it's better than dying while waiting for Cal to heal up.

4. Use your Force powers as much as possible

Because your Force powers are tied to a meter, it's easy to think you should save them until you absolutely have to use them. Ignore this impulse. Cal's Force powers can easily turn the tide of a fight, and the meter ticks up quickly if you get a few direct hits in, so make sure to keep using Slow, Push, and Pull in combat as much as possible.

5. Save at every Meditation spot you see

Meditation spots are the game's save points and checkpoints. They act like the bonfires in Dark Souls, giving you a chance to rest up and acquire upgrades from the skill tree. However, always make sure you stop off at them, as you respawn at the last one you sat down at when you die. Nothing stings more than spending 20 minutes exploring a level, dying, and respawning ages away from where you got to.

6. Invest in increasing your Survival and Force powers early on

The Skill tree has 3 branches: Lightsaber, Force, and Survival. Lightsaber attacks all require your Force meter to use, so focusing on the other two - which can increase your max health and max force - will help you survive early encounters.

7. Look for alternate paths rather than assuming you've hit a block

BD-1's holomap highlights areas you can't explore just yet with a red hologram. This usually indicates when you need to unlock a new skill before you get into that are, but sometimes, it indicates a shortcut in the level. Have a poke around these areas to see if there's a hidden passage that can open them up.

You'll unlock new abilities for Cal and BD-1 constantly throughout your time in Fallen Order, and as soon as you do, you should head back to planets you've already visited. You'll be able to discover more in these areas almost immediately, which you'll get more XP for. More XP means you'll get more powers quicker as well, so make sure you're heading back as soon as you unlock new abilities.

9. Know when to use different lightsaber types

There are two main lightsaber types in Fallen Order; you'll start off with the single saber and unlock the double-ended blade later on in the game. Knowing when to use them will make a huge difference to how effective you are in combat. If you're fighting a handful of enemies, use the single saber, as it does more damage when you connect with an enemy.

However, if you're fighting a big crowd or facing multiple stormtroopers with blasters, use the double blade. Deflecting multiple blaster bolts with it sees Cal send them all back quickly, while he'll only deflect one back with the single lightsaber before blocking.

10. Head to Dathomir early on to get the double lightsaber

After your first visit to Bogano, you'll have the choice of which planet to head to. While the game will heavily hint that Zeffo is the one to go for, there are plenty of handy upgrades you can get on Dathomir that will speed up your progress. The most important is the double lightsaber, which you'll be able to find if you follow the main path through the level to a hooded figure. Nab it as soon as possible.

Sense Echoes are items that Cal can discover that reveal a glimpse of the past to him. More importantly, they also give a fair chunk of XP when you find them. Some even give you a health or force boost if you collect 3 of them. They're worth hunting out for the XP boost, but the fact the stories attached to them are interesting in their own right just sweetens the deal.

12. Performance Mode is there if you want it

The PS4 Pro and Xbox One X versions of the game have a Performance Mode that can be turned on in the Visuals tab in the Options menu. It limits the resolution to 1080p, but improves the framerate of the game. A combat-heavy game like this benefits from a higher framerate, which makes the action smoother, so it's something to consider if you're willing to drop down the resolution.