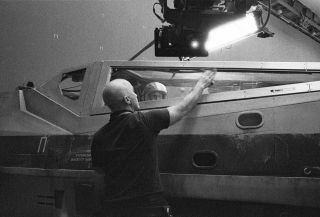 The adventures of Rey, Finn, and co will continue with Star Wars: Episode 8 next year, and director Rian Johnson has taken to his Twitter and Tumblr pages to announce that filming has reached the halfway point. He also shared a couple new images from the set of the highly anticipated movie, and you can check them out below...

As has been the case each time Johnson has shared a set photo, the new imagery doesn't reveal much. In this case, we get a snap of an X-Wing and an image of an unspecified crew member cleaning a control panel.

Johnson's careful, unrevealing photo selection will likely continue as Episode 8 finishes up principal photography in the next few months. While we await more clues - and hopefully, some answers to imporant questions - we can at least be thankful that it looks like this year's Rogue One: A Star Wars story will satisfy our Star Wars cravings.