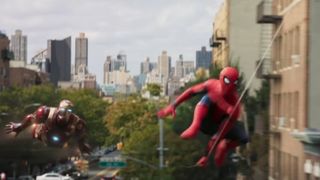 Spider-Man: Homecoming (and its many, many trailers) is full to the brim with fantastic scenes but – minor spoilers for the movie here – there’s one iconic scene from the trailers that didn’t make the final cut.

The scene in question involves that shot in the trailers of Iron Man and Spider-Man swooping over Queens. It screams take all my money but, unfortunately, was MIA in the finished product.

Speaking to ScreenCrush, director Jon Watts explained what was the deal behind removing one of the coolest shots to come out of the MCU in years, and one that arguably sold the movie for a lot of people: “I think what happened was in the very first trailer they wanted a shot of Spider-Man and Iron Man flying together. And they were going to use something from the Staten Island Ferry [scene], but it just didn’t look that great.”

Watts, though, had a perfect solution to having Spidey and Iron Man appear together in the same shot, “I think I was like ‘Let’s just put them in Queens. Let’s use that as a backdrop.’ Because we couldn’t just create a whole new shot, so let’s just use one of these shots of the subway, put them in there.’”

Except, of course, the shot didn’t make it. In fact, Watts forgot about it until, presumably, he saw the trailer. Don’t worry though, he’s as weirded out as you probably are, “I feel a little weird that there’s a shot in the trailer that’s not in the movie at all, but it’s a cool shot. It’s funny, I forgot that we did that.”

Hey, at least they didn’t pull a Star Wars: Rogue One and have a whole ‘nother movie of scenes cut from the trailers.