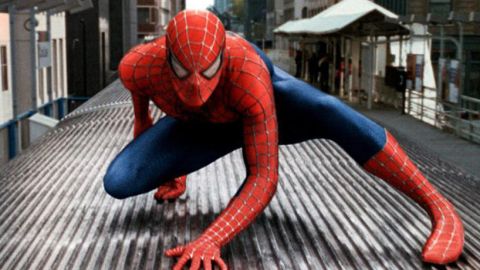 A comic book sequel to surpass even X2, this is a resounding success. Box-office records beware - here comes Spider-Man... again.

"With great power comes great responsibility". Sam Raimi knows what that feels like - - his blessing and/or curse was great box office for his first shot at Spidey glory. Thank goodness, then, that Raimi and his team have taken a long, hard look at what worked about the original and used that to fashion a superior sequel. Like Bryan Singer with X-Men 2, the man who launched the wall-crawler on to the big screen has delivered a mature, muscular follow-up that pulses with life.

If the first outing sometimes felt like Raimi was reining himself in to forge a well-crafted, respectful origin story, success has allowed him the freedom - - and the finance - - to unleash his full capabilities. Make no mistake: this is still faithful web-slinging. But now that Raimi has demonstrated mainstream flair to the tune of an almighty ker-ching, he's allowed himself to sprinkle in his cult sensibilities to ensure the quality leaps even higher than our hero.

Case in point? The first time Doc Ock's tentacles display their deviously destructive power. When surgeons try to free Alfred Molina's Otto Octavius from their terrible, brain-controlling embrace, all hell breaks loose as the metallic marauders try and take down everyone in the room. Even without the Evil Dead-style swirling tentacle-cam shots, it would have been a great set-piece, all seesawing cameras andballsy smackdowns. But with them, it's a thing of ballistic beauty. Feel those goosebumps.

Not that it's the movie's high point. That would be a vertigo-inducing scrap on a clock tower; or the trailer's car-through-coffee-shop-window eye-bulger; or an astoundingly realised rumble on a speeding train... Yes, safe to say it's time to forget those faintly awkward CG clashes seen in the original. Here, Raimi spins scenes that will drop jaws and staple them to the multiplex carpet, his effects team overcoming the weightless arachno-problems to truly realise the power and impact of our hero as he swings through New York. The city itself shines, too. No longer a half-hearted, faceless metropolis, the character of the Big Apple is brought to fully realised (and glorious widescreened) life thanks to Bill Pope's epic cinematography.

Yet Raimi's armoury doesn't just consist of kinetic set-pieces. After all, there are more ways than one to swell a viewer's heart, Uncle Sam grounding the story in the little things - - those quiet moments between the tormented souls who must live in the superhero's shadow. Picking up Peter Parker's story two years after we left him shunning Mary Jane's (Kirsten Dunst) affections at Norman Osborn's funeral, everyone's plotlines have evolved in directions that feel completely natural. Spidey 2 may be bigger and better, but it's also plenty deeper and darker.

The script crackles, Oscar-scooping final drafter Alvin Sargent wrangling together the contributions of several scribes (including Smallville showrunners Alfred Gough and Miles Millar and Pulitzer-winning novelist/comic nut Michael Chabon) to bring us up to speed with grace, pace and wit. Tobey Maguire now seems entirely comfortable filling Parker's shoes as well as the webbed suit, his hangdog expression demanding viewers' empathy. And Dunst infuses Mary Jane with as much glamour and spark as she can in her relatively limited screen time, the delicate weaving of plotlines also allowing her to empower MJ into a lifesaver all of her own. Even better, dangling plot threads are neatly scooped up, with James Franco in particular stepping to the fore, grasping the chance to add extra shades of darkness to his tormented Harry Osborn.

Mind you, it's not just the returning actors who delight. In the Spider-sequel's continuing quest to fix the faults of its predecessor, we're not only gifted with a great character actor for a villain, but this time we're actually allowed to see his face. And what a face, Molina's heavy (acting) chops quivering with conflicted anguish as Dr Octopus tears up the screen. He's part scientist fighting to keep control of his mind, part cackling villain relinquishing body and soul to his new power. Trust us: wrongdoers don't get any more watchable than this.

Complaints? One or two, mainly instances where the movie becomes a little too repetitive or, in the case of a dreamscaped heart-to-heart between Parker and Uncle Ben (Cliff Robertson), temporarily flabby. More quibbles than flaws, however, they never threaten to stop this being anything but a triumph. The year's best summer blockbuster has just swung in through the window... And it's hard to believe that anything else is going to be able to catch it.

A comic book sequel to surpass even X2, this is a resounding success. Box-office records beware - here comes Spider-Man... again.