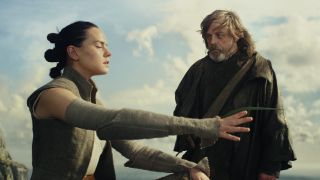 After all the fanfare, theories, and speculation surrounding Rey’s parental reveal in Star Wars: The Last Jedi, they turned out to be… two nobodies. Surprise?! That may not be the end of the tale, though. J.J. Abrams is back on board for Star Wars Episode 9 and, as Simon Pegg has recently revealed, he wanted to go in the complete opposite direction for the identities Rey’s mum and dad.

Speaking on the Happy Sad Confused podcast (H/T Comicbook.com), Pegg (who had a cameo in Abrams’ Star Wars: The Force Awakens) explains that the now two-time Star Wars director had something very different in mind.

“I know what J.J. intended or at least [the idea of] what was being chucked around. I think that’s been undone slightly by [The Last Jedi],” hints Pegg. “There was some talk about a kind of ‘relevant lineage’ for her… But I honestly don’t know, and I don’t know if anyone knows, we’ll see.”

My first thought? She’s a Skywalker. Lineage is something pretty sacred in a galaxy far, far away – and there aren’t many more prominent families than the Skywalkers. Now that Luke (and possibly Leia) have bitten the space dust, having Rey and Kylo Ren as the only remaining Skywalkers would make a heck of a lot of sense.

Whether that will actually happen is anyone’s guess. Simon Pegg is in the dark – as are the rest of us. However, with Abrams at the helm again, Star Wars 9 can reverse some of the seemingly irreversible issues that some fans had with the movie, including the issue of Rey’s parentage.

It could easily be waved away as Kylo being a lying little scamp and then, lo and behold, Rey is Luke’s daughter. Simple, right? Except nothing ever is in the Star Wars universe…

Star Wars 9 isn't too far, far away. Check out that and every single one of the upcoming and new Star Wars movies.