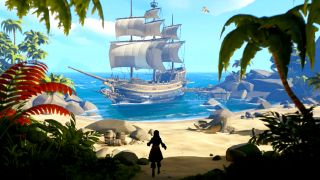 Sea of Thieves is steadily revealing many of the secrets it held back from the closed beta, and now it may have even released the Kraken… albeit unintentionally. A few off-screen camera shots of the creature emerged on gaming forum ResetEra, letting some tentacles slip out from the monster mystery that developer Rare's carefully cultivated for as long as Sea of Thieves has been in development.

Spoiler warning: If you truly value having the half-digested bananas and grog scared out of you, you may want to skip viewing these leaked images and let your first Sea of Thieves Kraken encounter be a complete surprise. You have until the bottom of this dancing skeleton gif from Monkey Island 2 to make up your mind...

Alright, here are the screens. First up is a distant image of a few ships engaged in Kraken combat. Would you keep sailing or change course to help out your fellow sea scoundrels? I think it would depend on whether I had a hold full of treasure, personally. I'm not about to let a damn giant octopus sink my swords-and-instruments fund.

Next is a too-close-up one of the Kraken's tentacles, showing its horrible arm-mouth. Do cephalopods typically have toothy maws at the end of their appendages? No, but this isn't a typical cephalopod. Rare says the Kraken can use these tentacles to pick pirates up and thrash them about, or even swallow them whole. Yikes.

They can also do this.

AHHH LOOK AT HOW BIG THAT TENTACLE IS COMPARED TO THE PIRATE FOOLISHLY RUNNING UP TO IT. That is so freaky.

What do you need to do to encounter this beast, or to make sure you always stay several leagues away from it? According to this Eurogamer video, the Kraken behaves a bit like the alien from Alien Isolation: rather than spawning in and out as dramatically appropriate, it always exists somewhere in the world, looking for prey (that's you). The water around your ship will go dark and the music will shift roughly 30 seconds before the Kraken strikes, so if you're paying attention it shouldn't be a jump scare - just an 'encroaching dread' scare.

Rare told Windows Central the Kraken has eight independent tentacles, all linked to a central Kraken AI coordinating them around numerous strategies to sink your ship, eat your friends, and otherwise ruin your day. It can punch holes in your hull just like getting hit by cannonballs, but it can also rock your ship (hold on tight) or even wrap it up.

Players must attack the tentacles to prize their boat free - apparently it spurts ink everywhere, gross - before they can get the hell out of there. Killing the briny beast will earn you special rewards, of course, but don't let avarice dull your good sense. What am I saying, being a pirate is one big exercise in valuing material gain over personal safety. Happy hunting!