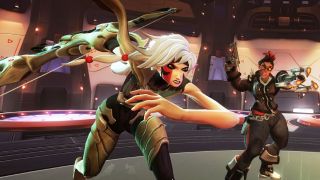 Gearbox's good-but-commercially-unremarkable hero shooter Battleborn will be going free-to-play soon, an anonymous source has reportedly told Kotaku. The game, which drew comparisons to Blizzard's Overwatch (some fair, some I would say less so), launched with a $60 pricetag on May 3 of this year, but is already down to $20 at many retailers. Publisher 2K is looking for a way to re-invigorate the game, and the new business model seems to be the way things are heading.

Interestingly, Kotaku's source claims that the shift has been in the works for awhile now, even before the game was first launched. According to them, Gearbox had intended for Battleborn to be free from the start, but 2K wanted it sold as a premium game.

If this story sounds familiar, you may be thinking of Evolve, which also considered a free-to-play business model before it too was sold at full price, only to later reverse course (it should be noted that Evolve transferred hands from THQ to 2K partway through development, whereas Battleborn was always under 2K's umbrella). Evolve's concurrent playerbase went from triple digits to more than 25,000 when the game re-launched as a free-to-play game, so no doubt 2K would like to see history repeated here.

According to Kotaku's source, the official announcement will come this November.