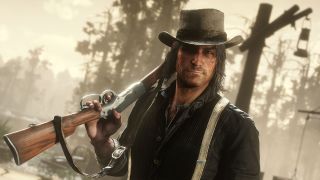 In an interview with The Hollywood Reporter, several lead actors from the massive cast behind Red Dead Redemption 2 discussed the film and real-life inspirations that contributed to their characters, as well as some of their favorite moments from the game's five-year production cycle.

Roger Clark, who plays protagonist Arthur Morgan, said film actors like Toshiro Mifune (of Seven Samurai fame) and John Wayne influenced his performance. Interestingly, he explained that he felt Clint Eastwood's character in Man With No Name was too stoic for Arthur. He also pointed to Rob Weithoff's performance as John Marston, the protagonist in the original Red Dead Redemption.

"One thing that Rob taught me, even before I met him, as a matter of fact, was that I had a very slim chance of being able to recreate what Rob did with John Marston," Clark said. "It’s too perfect, it’s too unique. I was going to have to do my own thing. If I tried to recreate that in any way, shape or fashion I don’t think I would have succeeded."

Weithoff, who returned to play a younger version of John, said his performance this time benefitted from his childhood interactions with his older sister and her friends. "She’s three years older than me," he said, "so when she was a senior I was a freshman and, of course, all her friends were the guys that I looked up to. I always wanted to be really cool like them but I never knew how. So, I have lived that kind of frustration of, 'Why don’t they think that everything I do is cool the way I think it is.' I tried to use that a little bit with John. He’s just young enough, cocky enough and not aware of himself enough because of his inexperience that he just kind of doesn’t get it yet."

Noshir Dalal, who played Charles Smith, a Van der Linde gang member with an African American dad and a Native American mom, said his experiences enabled him to connect with Charles' struggle to fit in. "He’s a man who’s half of one world and half of another and belongs in neither," Dalal said. "As a result, the only real people who ever considered him a part of their family is the gang. That idea of never really having a place to belong until meeting Dutch van der Linde and the gang, I resonated with that a lot personally because I’m half-Japanese and half-Parsi, so I’m Indian on one half and Japanese on the other half and either group doesn’t really look at me as belonging in their culture."

Alex McKenna said the sporadic nature of the script and recordings meant even some of the actors didn't fully understand their characters at first. Her character, widowed Van der Linde gang member Sadie Adler, didn't fully click until two years in, she said. This led to an amusing moment where she, Clark, and other actors "went around very, very quickly and read everybody's sides to get some more information about their characters and the story." She joked that, "I remember feeling very naughty, like we were all cheating in school, but we really just wanted to make it the best performance possible."

Clark, meanwhile, said he's been encouraged by reviews praising the game's characters - a strength he attributes, in no small part, to the recording environment Rockstar created. In a similar vein, Dalal said, "I had never been at a place where the human story and narrative were driven so far in front of any other requirement or need."

You can read The Hollywood Reporter's full interview here.

We're sure to meet new characters when Red Dead Online arrives. Here's everything we know about the upcoming multiplayer mode.